From our Fall 2018 Newsletter–At 87, Keith Parker shows no signs of slowing down. He’ll drive a combine for eight hours, harvesting corn that feeds his 120 head of beef cattle. “He works 10 times harder than I do,” says son David. Keith doesn’t watch much TV, using the time instead to catch up on keeping the books. David and his brother, Wes, who live and work with their dad, attest to his remarkableness—from physical stamina to always seeming to do the right thing. 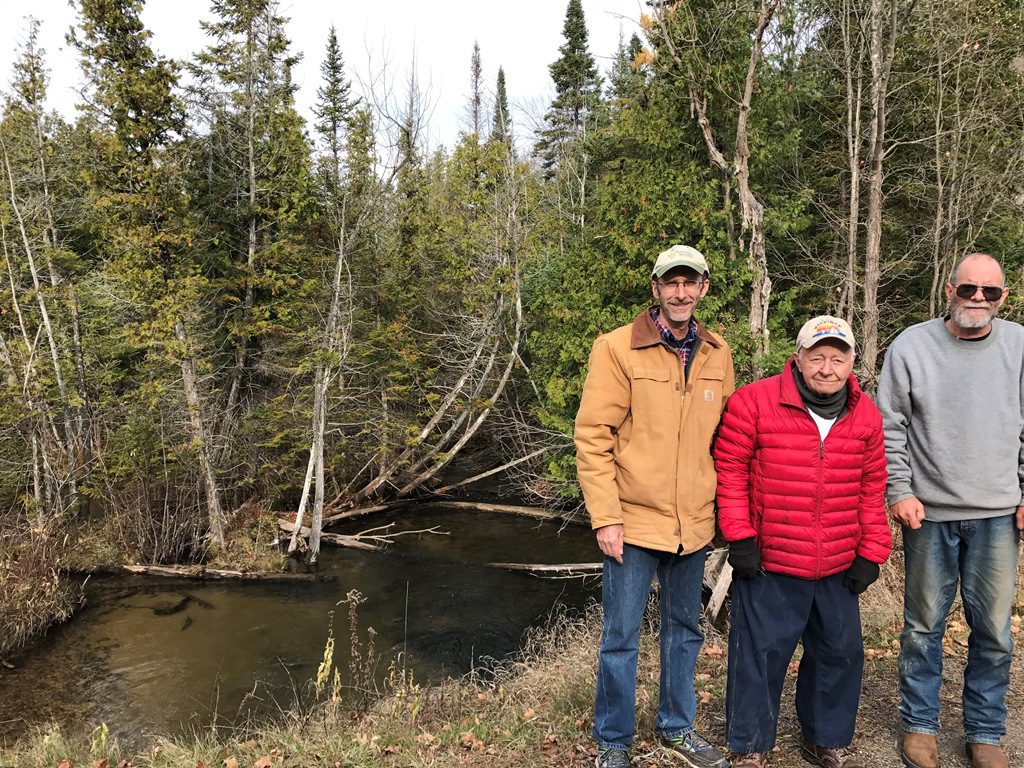 Keith Parker (center) with sons Wes (left) and David stand near the pristine stream that will be protected by their conservation easement.

Keith grew up on the 340+ acre farm in the heart of Solon Township. In September, he preserved 99 acres with a conservation easement. The family hopes to preserve additional acreage in the future as funds become available through federal farm programs matched by private donations.

“I never want to see it developed,” says Keith. “There have been a lot of offers over the years. Money is hard to come by and I almost sold it once but I’m fortunate that I didn’t. If you are a farmer, development causes problems.” Between the land they own and 20 parcels that they lease, the Parkers farm 750 acres. 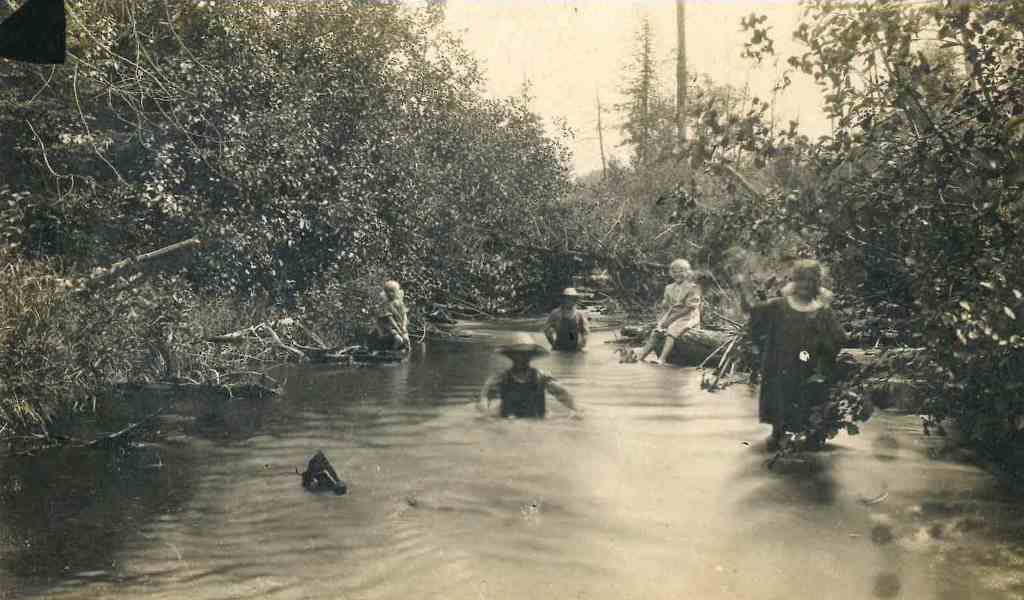 The Parker family has swam, fished, and gone tubing in this stream for generations. The protected land backs up to our Cedar River Preserve and is a “highway for wildlife” says Wes Parker.

The multi-faceted land they have forever protected takes in 1,300 feet along a Type I cold water trout stream. “We’ve never missed an opening day and always catch our limit before lunch,” says Keith. The stream was just a bike ride away for his sons; Wes recalls escaping to

cool off on a hot day and tubing wider sections nearby.

The protected land backs up to our Cedar River Preserve, and is a “highway for wildlife,” says Wes. Twenty-two acres of wetland shelter bear and bobcat, deer and songbirds. On the upland is a northern hardwood forest and sweeping views of the Cedar River Valley. The conservation easement also takes in 16.5 acres of prime and unique farmland where the Parkers practice no-till methods. They grow mostly row crops to feed their cattle, and sell the excess to a broker downstate.

Keith’s grandfather, Charles Loeffler started farming here in the late 1800s while also working for the railroad, selling tickets at the Solon Township Depot. Charles’daughter, Esther, married Howard Parker, who owned a car dealership downstate. The dealership went under during the Depression, so the Parker family moved back north and Keith and his two brothers were raised on the farm. 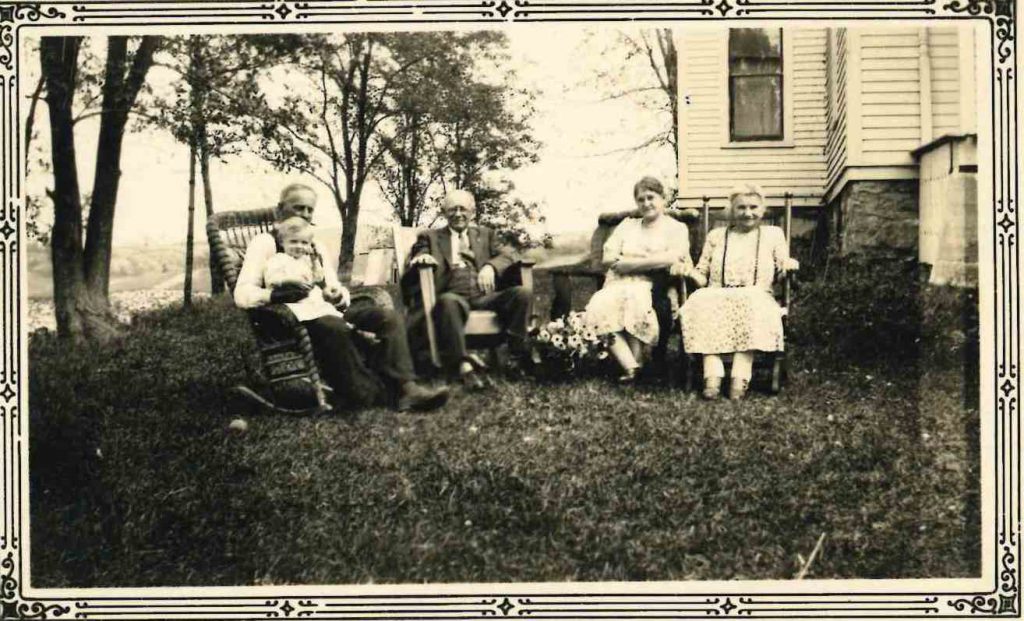 Keith Parker as a baby, sitting on his father’s lap.

Keith attended the one-room schoolhouse just down the road, and in 5th grade, began earning $5 a week to clean and start a fire every day before the teacher arrived. Today, the white-washed school house, with its fading paint, and surrounding undeveloped land still feels like a scene lost in time.

Keith took a bus into Traverse City for high school, where he met his wife of 63 years, Margaret. She died last summer, having raised six children in the modest ranch house that Keith built in 1956. To make ends meet, Keith worked full time as the supervisor of the power plant at the Traverse City State Hospital in addition to farming. Despite all of those demands, he also found time to serve on the Soil Conservation District’s Board, and still chairs the Solon Township Board of Appeals. 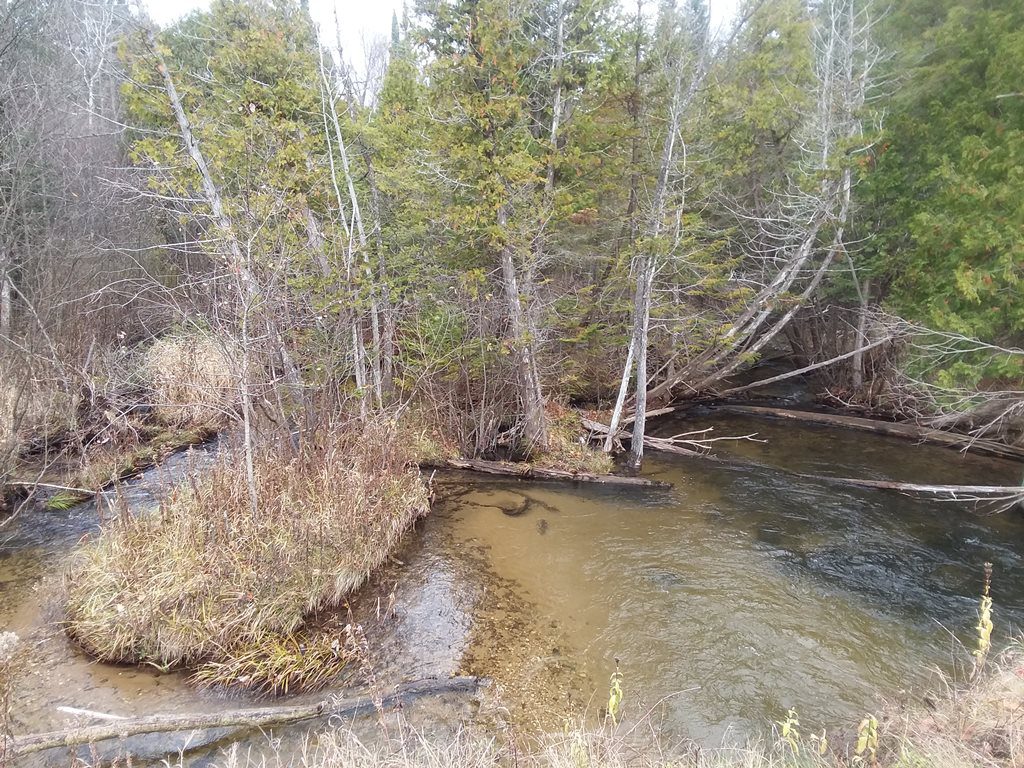 Preserving their farm has been a goal for the Parkers for quite some time. They were vocal supporters of a millage that was on the ballot in 2006. The failed millage would have raised $1 million annually to preserve farmland. “Dad has always been progressive and protecting farmland is something we very much believe in,” says Wes. “All you have to do is to look at Long Lake Township, where all the farmland is just about gone.”

“We really appreciate that the Conservancy was persistent and changed course after the millage failed,” adds Wes. “They picked up the ball and ran with it.”

The change in course led to, among other things, a new federal program that funds farmland protection and also preserves water quality. The streams and wetlands on the property made it a winner for the program, which funds 50% of the cost of purchasing a conservation easement. The Parkers will donate 25% of the value of the land, and generous donations from Conservancy supporters will cover the rest.

Neither Wes nor David have children. But there are a lot of nieces and nephews in the family. “It will be an opportunity for somebody, whether it stays in the family or not,” says Wes. “The farm will keep going. And that’s a great thing.”—Carolyn Faught