Back in 1999, Patty Shea (right) teamed up with her good friend, Joanie Woods (left), and they began something called the Wildflower Rescue Committee (WRC).  Patty had been involved in a similar group downstate, and after watching the construction boom that was occurring in Leelanau, she knew she had to do something to save wildflowers like trillium and jack-in-the-pulpit that were being destroyed.

“Every time I see a new driveway or house going in and we missed a chance to dig up the wildflowers before the bulldozers arrived, it makes me crazy,” she said. “If people would just let us spend a few hours there ahead of time they would be doing the world a great favor.” 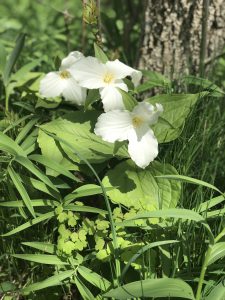 Patty has since retired as co-chair, but the group she helped found two decades ago continues to dig wildflowers at construction sites every spring. The group then sells the plants over Memorial Day Weekend on our Leland Village Green. In the process the WRC raises about $25,000 each year for Leelanau Conservancy projects and has saved countless wildflowers from being plowed under.

The plants have found a new life all over the area and the leftovers are planted at our natural areas. Why does it matter?

Native wildflowers have evolved over the centuries along with birds, insects and animals which have a symbiotic relationship with the plants. They are a crucial part of Leelanau’s ecosystem—as well as being an incredibly beautiful sight to see every May.

Over the years, Patty and Joanie’s vision and hard work have truly made a difference in so many ways. They are just two of nearly 300 people who volunteer with the Leelanau Conservancy annually. Volunteers help to lighten our load by building and maintaining trails, removing invasive species, stuffing envelopes, and helping to raise funds to protect Leelanau’s stunning landscapes, pristine water, and iconic working farms.