Having moved to Omena over 30 years ago, the Putnam farm just up the road from where I live is a place I have long worried might turn into a subdivision. I have walked or driven past the farm’s rolling valley and iconic barn hundreds of times. Every time I do, I am so grateful that the cherry trees Rennie Putnam planted still stand, and the farm still looks like it might have a century ago. 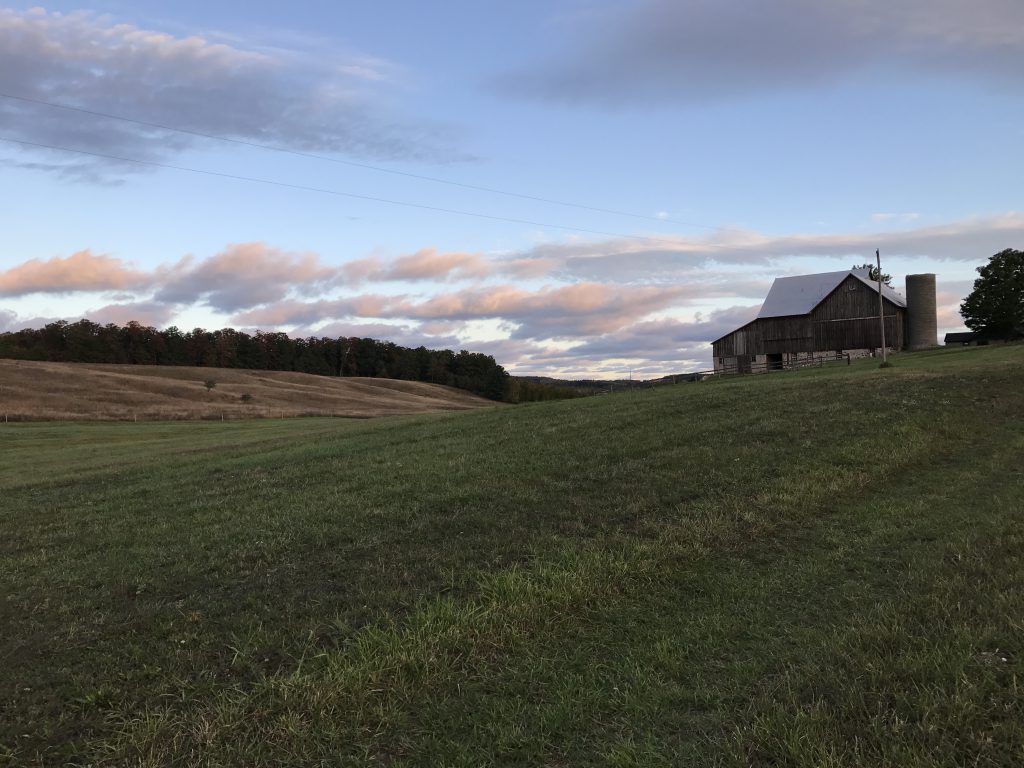 So it goes without saying that like so many people who love this farm, I am overjoyed to know that 190 acres here are now forever protected, thanks to the heirs of my once-upon-a-time neighbors, Rennie and Esther Putnam. The couple passed away over a decade ago; since then their children have worked with the Leelanau Conservancy to protect the farm. It is now part of a larger block of protected lands adjacent or nearby, including Frazier Freeland Preserve, Saving Birds Thru Habitat’s Charter Sanctuary and private protected lands along Belanger Creek.

I met with Fred Putnam, Rennie’s son, who has been the point person for his family, and later chatted with his sisters, Doris Gilbert and Mildred Connell. The family has sold a conservation easement on the property, which restricts development and lowers the land’s value so that it remains affordable for other farmers.

On a tour in Fred’s truck, he pointed out the property line; a row of pine trees Rennie planted, and talked about his father’s upbringing. Born on the farm in 1916, Rennie was the youngest of five. His father died five years later. Rennie’s mother, Anna, his siblings and nearby relatives kept the farm going. They plowed with horses and planted some of the first fruit in the area.

A Depression bank failure in 1929 wiped out Anna’s $5,000 savings, but the family soldiered on. “They owned the farm and between the cattle and pigs and a huge garden, they could feed themselves,” said Fred, adding that for as long as he could remember, his parents shared garden produce with those less fortunate. 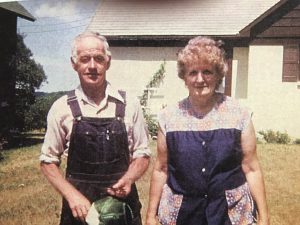 Rennie and Esther Putnam, photo thanks to Doris Gilbert

In 1934, when Rennie turned 18, he bought the then 180-acre farm from his mother. Rennie’s siblings “had had enough of farm life,” said Fred. Brother John owned a gas station and bar in Omena, known today as Knot Just a Bar. Harold, the oldest, became a career army officer. Rennie’s sisters married and moved on.

A Love for Farming

But Rennie loved everything about the farm. To make ends meet, he worked as a carpenter, tending to farm chores at daybreak and in the evening. He married Esther, Fred’s mother, when he was 27. She had also grown up poor and worked hard. “They were incredibly frugal, tracking every penny that came and went, but at the same time we never wanted for anything,” said Fred’s sister, Mildred. Fred recalled his mother putting patches on his father’s clothing long after they could afford to buy new. Growing up in the Depression affected his parents for a lifetime, said Fred.

Mildred said it wasn’t until she was in high school that she realized just how hard her dad worked.  “I came home from a babysitting job around 4 am and he was just beginning his day. I realized he did that every day,” said Mildred.

The siblings have fond memories of growing up on the farm, which eventually grew to 260 acres. Mildred recalled clearing the fields of rocks in the spring with her family, which “made it more fun than work.” They planted pine trees with their dad, and canned pickles with their mom. After chores, Rennie often played hide and seek with them in the barn. “We never found him once,” said Doris. Rennie would climb inside the sprayer to hide, or squeeze outside through a loose board and stand on the shed roof.

In addition to cherries, Rennie grew feed for the cattle and pigs he took to market. “He was a general farmer,” Fred explained. “If cherries had a bad year, he had other ways to make money.” Like his sisters, Fred said that the values his parents taught him, from thrift to hard work to charity, have guided his own life.

Preserving a Sense of Place

Now retired after a career downstate in operations management, Fred spends weeks in Omena, lovingly caring for the barn built by his grandfather. He has re-glazed windows and restored a 1949 tractor. Fred might have taken over the farm but said a unique opportunity to work for publisher R.L. Polk & Co. sent him in a different direction. “I saw myself in the business world and although Dad made a good living, there really wasn’t enough here to support two families.”

The trees Rennie planted are now tended by Cherry Bay Orchards under a lease agreement. Part of the protected land borders our Belanger Creek Preserve. Over a decade ago, Rennie sat down with now-Executive Director Tom Nelson to learn about the Conservancy and his options. “Rennie loved the farm, but wanted to leave the decision for what happened to it to his kids,” said Tom. A few years later, Fred and Tom met around the same kitchen table. “Fred clearly revered his parents and the farm,” added Tom.

The Conservancy applied for federal funds to move the project forward, but the first attempt failed. “It’s a very competitive process and only so much funding is available,” said Tom. “We just missed the cut.”

“Tom really took the bad news to heart,” recalled Fred. “He wanted to make it work. The family talked about bailing and just selling, but I said let’s give it one more go-round.” 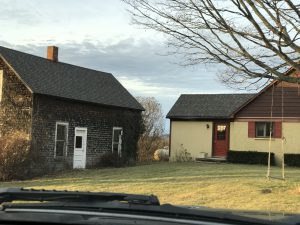 The 10-acre home and farmstead complex including the late 1800s barn is not part of the conservation easement. At some point, it will be sold to a lucky buyer. The siblings spent their earliest years in the original cedar shake house nearby, which had no indoor plumbing, and recall their mom heating water for baths in a washtub on the woodstove. “The cleanest one got to go first,” recalled Mildred. Rennie and Esther built the newer yellow house, moving in in 1952, when Fred was seven.

A Deep Sense of Satisfaction

This time the funding came through, which covers half the cost of the purchased easement. The land scored well in part because 93% of the project contains “prime and unique soils.”

Fred and his sisters are happy that the land will continue to produce food—and remain undeveloped.  “A lot of the very best farmland downstate is gone,” said Fred. Mildred added, “I would hate to see the land turned into a bunch of two-acre home sites.”

How would Rennie feel if he were alive today? “Dad really loved this land,” said Fred. “My sense is that he would be really pleased.”

“There’s a unique feel to the Omena farming district and its history that is really special,” added Nelson. “And there is a really deep sense of satisfaction in helping it to stay that way.”—By Carolyn Faught, published in March, 2018 (2017 Annual Report/2018 Spring Newsletter).