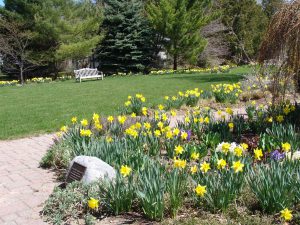 Posted September, 2013–The Leland Village Green is located in the Village of Leland on Main Street, across from the post office.  The Leelanau Conservancy, founded in 1988 and celebrating its 25th year in 2013, purchased and preserved its first green sanctuary in 1990. Leland Village Green is a place where residents and visitors can sit and relax on a comfortable bench, wander through a perennial garden and admire, at the end of a cobblestone walkway, a colorful tile wall surrounding a big maple tree.  While an integral part of Leland Village, the Village Green provides a lovely respite from the busy picturesque village shopping district.

The preservation of the Village Green was the result of efforts on the part of the newly formed Conservancy and its many supporters and volunteers who contributed and invested funds toward the purchase and then toward further enhancement of this serene community place.

To appreciate the significance of protecting and conserving this green space, it is of interest to know that the original acreage was once the parking lot for the Manitou Island Ferries that depart from the nearby Fishtown.  When the area was offered for sale, there was a proposal to erect a hotel.  Mr. and Mrs. Hugh Smith, who eventually purchased the available land, had considered developing a shopping complex of perhaps 20-30 shops.  Concern was expressed by the community that the peaceful atmosphere of Leland was being eroded by injudicious development.  A New York Times August 1988 article remarked on rapid commercial changes taking place in this ‘quiet Great Lakes village.’

At this time, the newly formed Leelanau Conservancy, founded by Mr. and Mrs. Ed Collins, approached Mr. Smith who was sympathetic to the idea of preserving the land as green space. He offered to sell the land and two adjacent properties totaling one acre to the Conservancy at the cost of his investment and allow time to raise the necessary funds.  An intensive fund-raising campaign was immediately initiated and donations received enabled the purchase of the property for $460,000.

The property consisted of eight 50- by 100-foot lots.  Two additional lots were acquired by the Conservancy and their sale enabled the completion of this one-acre space.  Initially there was some thought that a new post office might be built on one of these lots.  Four of the lots included a house originally owned by the Grosvenor family when Mr. Smith purchased the property.  The house was then sold to a summer resident and moved to another location in the village.  The lot known as the Cook House was sold to a real estate syndicate who agreed to a Historic Preservation Easement that ensured that the old home would remain in harmony with the Green.  It continues to be a real estate office.

In the spring of 1989, the Conservancy conducted a survey of residents, permanent and summer, and investors to assess opinion whether the Village Green site should be total open space or allow for limited light commercial development.  A majority of respondents chose the open space option.  There was strong support for a quiet, peaceful area with trees, gardens, and a few park benches—not a formal picnic area with tables or playground space since these amenities were available at a nearby park. A landscaping expert, George Liljeblad, was hired to develop plans for completing the landscape design.

An initial plan to incorporate a bandstand was dismissed, but by 1990 grading and seeding was completed and irrigation extended to allow the establishment of a skating rink. By that winter skaters were out enjoying the ice.  The rink, later moved to Hancock Field, was discontinued when parking issues and the need to construct a warming hut needed to be considered and would conflict with the Conservancy’s goals for the Green. 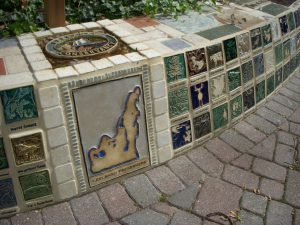 Generous donations, memorial gifts and volunteer efforts enabled improvements that enriched the property. The Adelia Ball Morris Memorial Garden was created by the Village Green Gardeners (a.k.a. Leland Dirt Club) volunteers.  Since 2007, the vibrant mosaic wall with tiles crafted by artisan Leif Sporck has recognized those who have contributed through the Conservancy’s Leelanau Preservers program.  One hundred percent of each Leelanau Preserver donation funds the land protection projects.  As the list of Leelanau Preservers has grown over the years, the mosaic tile wall in the Village Green has filled in.

Until 2009, the Village Green Gardeners were the mainstay designers, planters, and maintainers of the perennial gardens when upkeep needed contracted assistance.  They also held an annual perennial sale to raise funds needed to maintain the gardens.  Later the Wildflower Rescue Committee joined the sale, adding wildflowers rescued from development sites that then find new homes in many gardens.  The proceeds support the work of the Wildflower Rescue team and the maintenance of the Village Green gardens.  On-going conservation and preservation efforts are necessary to protect the Green spaces from invasive insect and plant species, soil depletion, and attention to aging trees and diversity. 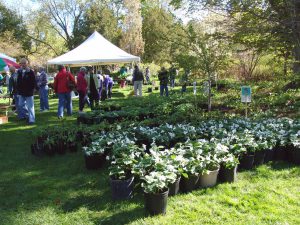 While maintaining the Conservancy’s philosophical goals for the Village Green as a place that is environmentally nourishing, quiet meditative, and part of the identity and uniqueness of Leland Village, the Green is also the site of several nature and community oriented events.

At Christmas time, the Norway spruce is decorated and tree lighting, a Santa Claus visit, and carol singing takes place.  In summer there are live band concerts.  Small tents and chairs are permitted for events like the Farmers Market.  Other events have included the Lake Leelanau Lake Associations Ice Cream Social, Rotary, and Leland Public School spring concerts.  Some private events that meet Conservancy conditions are also allowed.

Visit the Green, take a few moments to relax, wander around the Memorial Gardens, the Leelanau Preservers tile wall and watch the comings and goings of Leland Village.–Many thanks to volunteer writer Ilene Wolcott for pulling this history together!