Leelanau State Park Expansion: For the Birds! - The Leelanau Conservancy
Skip to content

This winter my husband, Dave, and I noticed several cars coming and going at the end of our road. We live along M-22 in LeelanauTownship, just south of Omena. Turns out an eagle and two of its young had taken up residence in a tree top at the edge of Omena Bay. The trio took turns diving into the shallows off our beach and we could only assume that a fishing lesson of sorts was in progress.

That same week, I received some of the most amazing photos of snowy owls taken this winter by Sheen Watkins, a nature photographer who submitted the photos for our Why Leelanau blog. Sheen had spotted the owls in an open field further north in LeelanauTownship at the tip of the peninsula.

Leelanau Township—particularly its northern-most reaches, contains some of the most outstanding bird habitat in Michigan. Thousands of birds pass through the tip of the peninsula during migration on their way to Canada. “From mid-April to mid-May, it’s one of the most fantastic birding spots anywhere,” says Ed Ketterer, an avid birder and Conservancy Board Member.

Strategizing for the Birds

It’s been a top goal of ours to protect lands at the tip since we opened our doors in 1988. Now with the addition of two 20-acre parcels purchased at year end, we have protected nearly 700 acres “for the birds” and over a mile of Lake Michigan shoreline. The corridor of protected land at the tip includes our properties as well as land owned by the Leelanau State Park and privately owned lands protected by conservation easements

The latest project came about when two 20-acre parcels became available from the Haverberg family. The northern parcel is right across the street from our Lighthouse West Natural Area. “The views from here are spectacular; offering a panoramic look at Cathead Bay, Lake Michigan and West Grand Traverse Bay,” says Matt Heiman, Director of Land Protection. “It would have been a prime parcel for development.” The other 20-acre southern parcel abuts the Leelanau State Park near Mud Lake. 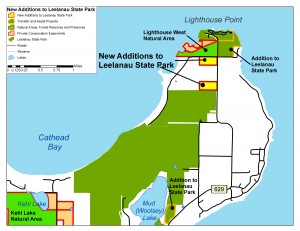 The project is one that we call a “transfer and assist” because we helped the Leelanau State Park to acquire it. The Conservancy worked with the landowner and provided a portion of the purchase price when it became evident that the State Park budget could not absorb the entire cost. In another project in 2008, the Conservancy helped the Park to expand by 51 acres and add 1,400 feet of shoreline by assisting with an application for funding to the Michigan Natural Resources Trust Fund.

“Our partnership with the Leelanau Conservancy has been amazing,” says  Al Ammons, Director of the Leelanau State Park. “Everyone all the way up the chain of command at Parks and Rec has been grateful for what we’ve been able to do together because we certainly could not have added these lands on our own.” The two latest additions (see map) “help the Park get closer to a long-time dream of connecting its campground area to the hiking trail area,” adds Ammons.

“Without the help of the Leelanau Conservancy, the Park would be less of a wonderful place to enjoy,” continues Ammons. “We’ve seen a huge uptick in visitors—40,000 in 2012 after the Good Morning America publicity. A lot of people come to see the birds. I expect to see a lot of returning visitors, which will be good for the Park and good for the local economy.” 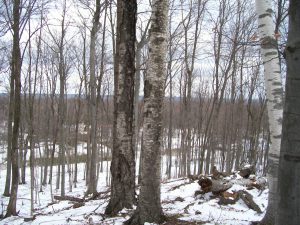 With places like the Leelanau State Park and our own Lighthouse West Natural Area so close by, I’ve often thought that if I ever retire, becoming a serious birdwatcher is in my future. I’d be joining quite a flock; a 2008 U.S. Forest Service survey reports that 35 percent of people 16 years and older participate in birding. Some 82 million people spend at least 100 days a year bird watching. Thanks to the Leelanau Conservancy, and its great partnership with the Leelanau State Park, the unique habitat at the tip of the peninsula will always provide a critical stopover point for our migrating birds, and a spectacular show for those who travel north to see them.  — Carolyn Faught, March 2013