Think of waves of sand, like a bolt of pale, champagne-colored, watered silk – the kind of moiré silk that might be worn by a Russian princess at her wedding  – unravelling in front of you, going on and on, for a quarter mile or more, until the waves of sand reach the shore of Lake Michigan.  Those waves of sand are succession dunes, somewhat covered with marram grass and spreading juniper and milkweed and birch and oak, but soft, tame, gentle, walkable, a place to take your children or your elderly relatives, a place to play, as the Houdek children did, a place to be easy and at peace. 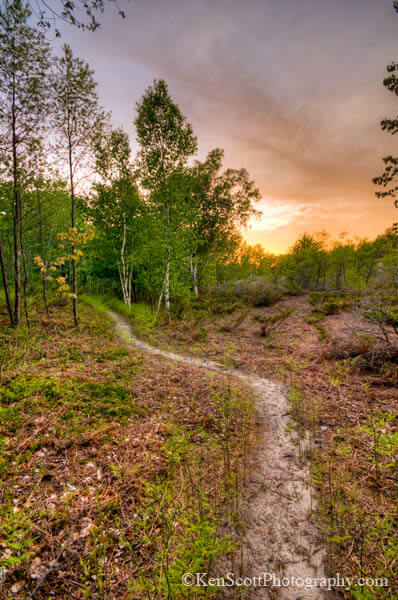 A Place to be at Peace

“My grandfather used to take us here,” Brad Houdek, 31, grandson of Julius Houdek, says. “That was Grandpa’s thing. When my parents would go away for the weekend, and my brother and I would stay with my grandparents, he’d take us out hiking for hours.” This land of dunes is the transition from the water to the hills, the undulant land between the shore and the trees. The marram grass and the creeping juniper are transition plants, the pioneer stage in the foredunes, pioneers like Brad’s great-grandfather, Joseph, son of Bernard who was the son of the first John Houdek, the man who came from Bohemia sometime in the mid-1800s and lived two miles down the hilly road.

“We’d come home,” Brad says, “Grandma would feed us. We’d fall asleep, completely exhausted.” The dunes were where Brad says he first learned to love the out-of-doors. His grandfather didn’t talk much. The sky and dunes and birds, the tiny creek, that was all there was and that was, in retrospect, powerful.

Delores Houdek, 87, grandmother to Brad Houdek, says that she didn’t learn English until she went to school. “They spoke Bohemian at home,” she says. Both her parents had been born in America but they spoke Bohemian: everyone they knew spoke Bohemian, too.

Helen Korson, Delores’ cousin, the wise, brilliant and incredibly competent register of deeds in Leelanau County for more than four decades, said of her close-knit Bohemian community in the Gills Pier area north of Leland, somewhat jokingly but not entirely, “The first generation we married each other. The next generation we had to go ten miles to Lake Leelanau to find partners.” The name Houdek means musician in the Bohemian language. The family was part of the tight-knit community that includes other Bohemian names – Korson, Kolarik, Jelinek, and Sedlacek – names on the roads that wend between the drumlins falling away from the high morainal spine in the northern third of the peninsula. 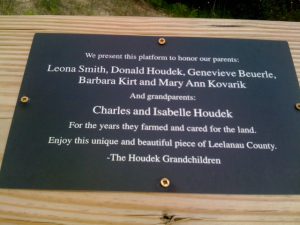 There are lots of Houdeks and, like the succession dunes, they came in waves from Bohemia. John Houdek, born in Prague in 1832, came from Bohemia twenty-some years after that. His first son was born on the Leelanau Peninsula in 1862. He homesteaded the land that is now the Houdek Dunes. The 20-foot-square original log home – and the barn and the granary and the large elegant home and all the buildings that came after that – has been beautifully restored by Marty Easling, one of Leland’s most esteemed builders. Easling points to a pond on the back slope of the property and says there’s a flowing well, a place where several members of the Houdek clan say there was a primitive water-filtering system called a “ram”. You can see the Houdek log cabin, and all the buildings restored by Easling Construction, along M-22 about five miles north of Leland.

A Deck Built to Honor their Ancestors

The great-grandchildren of the branch of the Charles Houdek family that grew up in that homestead, built a deck in 2010 in the Houdek Dunes overlooking Houdek Creek. They built it in honor of Charles Houdek, a brave pioneer, and all his progeny. Karen Kirt, great-grand-daughter of the first homesteading John Houdek, is proud to be a Houdek, proud of the deck. “Traversing the trails of Houdek Dunes gives me a chance to envision my [family] working the land. Whether they called in the cows or farmed for sustenance, the Houdeks dedicated their lives to this property,” she writes in an email. “I hope trail users will appreciate the past and create their own visions of the Houdeks in their minds as they use and hopefully embrace this land.”

The Houdek Dunes Natural Area is as pleasant as a park and as accessible. Several generations of Houdeks recreated there. They fished for small speckled trout in Houdek Creek and walked through to Lake Michigan to go swimming.

A Product of the Glaciers

Michigan’s 3,000 miles of glacier-made coastline is a land of sand and water and never more so than at the Houdek Dunes. A lot of the Leelanau Peninsula 11,000 years ago, was, like Chicago, under Lake Algonquin. The water – including all of Lake Leelanau, starting at Leland, and connecting through to Cedar Lake near Pathfinder, and extending all the way to Grand Traverse Bay and Traverse City – was everywhere except the highest hills. You can see some of the original Lake Algonquin shore in Leelanau County, a mile straight-back from Sleeping Bear Bay between Glen Haven and Glen Arbor, that high hill there. You can also see the old Algonquin shore in Traverse City, back along South Airport Road.  Much of the Leelanau Peninsula, off and on for the last 11,000 years, as the glaciers advanced and receded successively, was under water.  The lakes were bigger. The land was less.

Slowly, the peninsula came into being. It was not noisy. It was not busy. Twenty centuries back in time, over in Europe, Caesar was conquering Gaul and re-doing London, marching his troops around and teaching peasants how to build the Roman baths his men liked. But on the Leelanau Peninsula the world was new. It was wonderfully quiet. Two thousand years ago on the Leelanau Peninsula there was mostly only eagles and white fish and marram grass.

Marram grass is still present. Marram grass grows well in sand and can spread from one small tuft to a three-foot clump over the course of a summer. The woody roots, where the sand has eroded due to the wind, is a knotty tangle, like someone’s first attempt at a macramé wreath. You can see the circle of roots where the wind has blown the sand away. The land and the little plants invite one to tarry, to dilly dally, to lag, to look, to let the mind loose from its endless to-do lists. Here you can marvel at how a blade of marram grass, moved by the wind, makes a perfect circle in the sand: a natural compass. 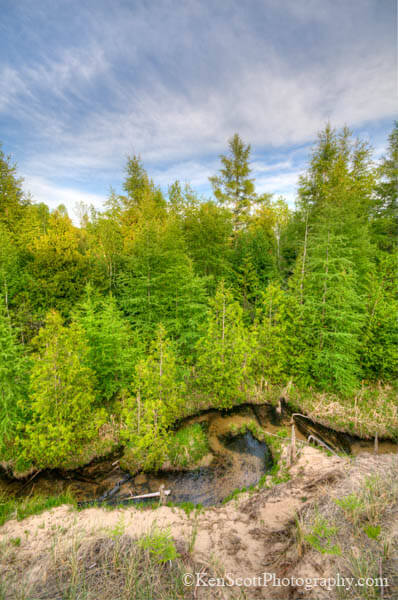 Sit down somewhere, on the sand, if you’re young, or on one of the benches, if you’re old, and you’ll see the small, intricate patterns and processes of nature that one can only see when one is still and watching. All around you are the waves of succession dunes.  As on the ocean, the rhythmic patterns are soothing. Put your nose right down into a sweet-smelling milkweed blossom and understand, maybe for the first time in your life, what monarch butterflies like so much. Look at the perfectly round hole of the wolf spider, for example, and marvel at the symmetry intuited by a spider. Notice the tiny cuneiform tracks of a bird, maybe a wren or a sandpiper; what have they written there?

Nature is our first and most ancient feedback system. It doesn’t take long to ratchet down to our skin and blood, our eyes and ears, to what we can smell. In an hour one becomes quickly, and pleasantly, more like one’s dog than a creature in a fluorescent-lit cubicle, reassured to discover that it’s all still there, those animal instincts and joys.

A Place in Time 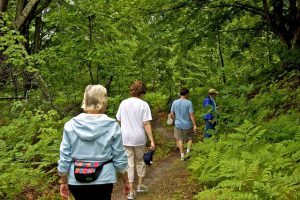 If you’re near the creek, you might see the water striders, the small insects that use their middle legs like paddles to cross the water. Also in the creek, if you happen along when they hatch, you might see horsehair worms swimming. These nematomorphs date back 15-45 million years, time so vast that the mind cannot take it in and must accept it on faith. Diaphanous luna moths sometimes emerge from their cocoons in the woods, several at a time, and if you see them, some cool early morning in June or July, drying their enormous four-or-five-inch wings, taxiing along on the leaves like tiny, pale-green planes, you will never forget the color of their wings.

Hunker down close to the ground and feel yourself part of it. Look above and squint your eyes and imagine you can see faces in-between the shapes of the leaves. Look at the horizon and see the circus animals in the clouds. Pick up a small Petoskey stone and be awed at how it is part of the coral reef that was here 400 million years ago, when Michigan was a saltwater sea. This is all yours, this un-real estate, this mesmerizing beauty of the intangible.  Sniff the pink air, which smells faintly of juniper, and tastes like the memory of gin. Sometimes the simplest and most benign things are the most sublime. 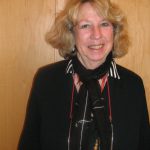 About the Author: Kathleen Stocking is an award-winning essayist who lives on the Leelanau Peninsula. Her third book, “The Long Arc of the Universe,” was published in 2016.

From a New York Times review: “All of us are watchers, but few are observers.  Missing are the village elders and seers, the astute perceivers who interpreted life and effort through nature and the primal cycles.  Kathleen Stocking is one of those seers, and she’s delightful.”