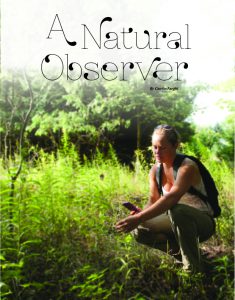 As a little girl, Liana May spent hours hiking at Sleeping Bear Dunes with her mother, a Glen Arbor artist. “She was my first botany teacher,” says Liana. Kristen Hurlin’s painstaking drawings of Leelanau’s natural wonders are well known throughout the region.

Her mother’s sketches from the wild were the beginning of Liana’s love affair with plants. She later earned a B.S. in environmental science from the University of Michigan and did field work in Tanzania for her Master’s. Since 2010 Liana—a.k.a. Borealis Botanicals—has inventoried plants at eight Leelanau Conservancy Natural Areas.

All in a Day’s Work

On a sunny June day, we meet at the Soper Preserve near Northport. She wears muck boots, carries an iPhone, and a compass hangs from her neck. As we walk toward an opening in the dense thicket, she tells me that back in May she had seen an emerging patch of showy lady slippers and is hoping that today they will be in bloom. Her plan also includes crossing the property in 30-meter-wide transects, looking for areas rich in species diversity.

“The Conservancy does a great job selecting sites for conservation,” she says as we bushwhack through the woods. Before long, Liana kneels to photograph a pretty flower called pink pyrola. She uses an app called iNaturalist to record her findings and GPS their location. If she can’t ID a plant on site, Liana tucks a specimen into a backpack for further study. As we walk, she points, ticking off common names: swamp dewberry, meadow buttercup, cotton grass, bittersweet, night shade, Jack-in-the-pulpit.
Liana’s knowledge of the plant world seems endless. I learn that “sensitive fern” earned its name because it is the first to succumb to frost. She points out scouring rush, which indicates a “very high quality wetland.” I’m amazed to learn that 289 sedges are found in Michigan.

What is a FQI?

She compiles a “Floristic Quality Index (FQI)” for each natural area (see box). “A FQI tells us what’s present when we acquire a property,” says Matt Heiman, Director of Land Programs. “It gives us a measuring stick to monitor changes, whether it’s from climate or changes in the natural environment. A thorough plant inventory also means you can make better management decisions.” Examples include trail planning that protects sensitive areas and invasive-species-control prioritization.

“We have expanded our knowledge of the flora of Leelanau Co, adding some 80 species previously not known to live here, and we have also mapped several populations of rare species,” adds Liana.

Our trek is nearly over when Liana locates the showy lady slippers she’d hoped to see in bloom. The stems are naked; deer the likely culprit. She sighs, records it on the app and makes a note to report the loss to staff.

Whether she is documenting deer over-browse or discovering an endangered plant, Liana serves as a scientific witness. Her studies will help the Conservancy to preserve and enhance the ecological integrity of the places you have helped us to protect. “I love to work outside and I want to do something positive for the natural world,” she says. “And Leelanau is the place I want to be.”

Watch Liana in Action and learn about Phenology and Climate Change