Deep Ties to the Northport Bluffs: The Garthe Farm - The Leelanau Conservancy
Skip to content

Sitting around the kitchen table with Kathy and Gene Garthe, learning about the farmland that has been in Gene’s family for four generations, what strikes me most is how deliberately the couple speak about history.  Gene and Kathy not only have deep reverence for the land on which they live but also for those people who came before them and settled on this beautiful bluff near Northport.

The farm, 200 acres of which will be soon be protected by a conservation easement  through the Farm and Ranch Lands Protection Program, was originally settled by Gene’s great-grandfather, Steiner Garthe in the late 1880s.  Steiner Garthe’s family made an epic three-month journey from Norway to the tip of the Leelanau peninsula and built a homestead on a bluff overlooking Lake Michigan because, as the story goes, “it reminded them of home.”  Steiner Garthe was among the first fruit farmers in Leelanau County, known for his experiments with apples and cherries and his interest in growing exceptional fruit.  Now nearly 150 years later, Gene carries on the tradition of fruit farming, experimentation, and thoughtful land stewardship on the Garthe family homestead. 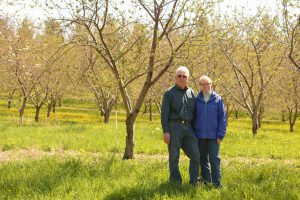 “Permanent protection of the Garthe farm will help prevent residential conversion of scenic orchards overlooking Lake Michigan and the Manitou Passage,” says Matt Heiman, Director of Land Programs. “The property contains a high percentage of “prime and unique farmland” and “farmland of local importance” as classified by the U.S. Department of Agriculture and the Natural Resources Conservation Service. Permanent protection of these soil types is critically important to maintaining world class cherry production in Leelanau County.”

Even though Gene is a fourth generation Garthe, he didn’t inherit the farm.  “I grew up in a family of six children down the road from the bluffs.  And I knew no one was going to give me a farm,” he says with a smile.  When Gene left for college in 1966, his parents were still subsistence farmers with a half-dozen cattle, some hogs, three acres of cherries, pears, and apples.  Gene went to Michigan State University and received a degree in social science.  But an interest in farming brought him home to Northport where he worked full time on Chuck Kalchik’s farm for nearly 15 years.

“When I came back from college, there were no more animals on my parents’ farm — or any of the farms around here,” Gene explains.  It was the era of Earl Butz, the Secretary of Agriculture, who is famous for his words to American farmers: Get big or get out.  Gene witnessed the changing landscape of farms in Northern Michigan first hand.  Neighbors starting planting hundreds of acres of cherries and hand picking was replaced by machinery, as the economics and scale of farming shifted.

True to his curious nature, Gene watched this shift and took note of what was required to be a part of the new terrain of fruit farming in Leelanau County.  Gene and Kathy bought Gene’s parents’ farm (“Dad’s place”) on a land contract and the neighboring Talgo farm, which belonged to Gene’s Aunt Christine, in 1985.  Gene began farming on the land where he grew up as well as on adjacent parcels that he leased from family relatives.

“Joining the three family parcels together as one farm was Gene’s long-term goal,” Kathy explains.  And over time that hope became a reality.  Gene and Kathy had the opportunity to buy the original Garthe Bluffs Farm in 1999 after the last of Gene’s great uncles passed away.  Gene credits Kathy’s diligent work and dedication to her career at Leelanau Memorial Hospital and Munson Medical Center for their ability to join the parcels back together into the 200-acre farm they now own.  Kathy smiles as she pours over a family history book and makes notes of pages for me to consult.  She says, “Gene has always had a vision that is consistent with his aunts and uncles — which was to keep the land in agriculture.  Long before the Conservancy was formed, this is what we believed in.”

Gene is known for his entrepreneurial spirit and love of research and new projects.  In 2000 he was approached by two companies about growing organic fruit.  The idea appealed to Gene because of his interest in how the land was farmed before the era of heavy chemical and machinery use — and also simply because, in his words, “research fits my personality.”  Gene is continually interested in moving towards a farming model that requires less inputs and less manipulation, drawing on the wisdom of those farmers who came before him.

Garthe Farms produces a variety of fruit, including pears, apples, sweet and tart cherries.  Gene produces organic apples primarily for cider processed at Almar Orchards near Flint.  He grows 26 varieties of apples that ripen over a six-week period, which allows him to harvest each type at its peak flavor.  As Gene lists off his apple varieties, I can’t keep up with my notes — stopping him to repeat a few delicious types I’ve never heard of, like Swiss Gourmet and Graham Spy.  His passion for growing fruit is contagious.  After I ask about a particular caterpillar I’ve been battling on my own few apple trees, Gene brings out the Michigan State University 2015 Guide to Fruit Pests.  The book is two inches thick.  “This is what keeps me busy!” he says with a twinkle in his eye.

Nikki Rothwell, the director of the Northwest Michigan Horticultural Research Station affectionately calls the Garthe farm, “Research Station North.”  She describes some of the “crazy things” Gene has encouraged her to do, like ordering a weed steamer from Australia to control weeds organically.  Gene always has a research project in progress on the farm and he enjoys collaboration.  “When I first came to work at the Research Station, the Garthe’s welcomed me into their home for dinner and shared books with me,” Nikki says.  “Kathy and Gene both encouraged my work as part of the agricultural community.”

It is easy to imagine the warmth of Kathy and Gene extending to Nikki and many other young farmers and farm entrepreneurs.  Not only is it important for the Garthes to have their land in a conservation easement, it is also very important to them that the land remain in agriculture so that future farmers will have opportunities to cultivate the land.  Kathy says, “We hope that this land will always be used for agriculture or as a place to conduct research.  What is exciting is that the Conservancy is giving us options.  We now have a team of people working on this question of how we can keep this land in agriculture.”

Before heading home, I get a tour of the buildings surrounding the farmhouse — a beautiful barn with an ancient stone silo, the pig house under a black walnut tree, a former chicken coop complete with stained glass windows, the granary, tool shed, and an extensive storage building that has doubled as an art studio.  All the buildings have been cared for, preserved and renovated for modern uses — like housing family and friends.  With respect for generations past, Kathy and Gene have created places for future generations to farm and flourish.  Their generous spirit emanates around the property and is reflected in their commitment to see their farm preserved with a conservation easement.  Like the Leelanau Conservancy, Kathy and Gene operate with the philosophy that a good project must be good for both the land and the people involved.  Because of their vision, the historic Garthe farm will remain in agriculture long into the future.  — Zane Kathryne Schwaiger