From our 2013 Fall Newsletter

This is the story of a journey—one bound by the timeless virtues of faith, hope, and charity. 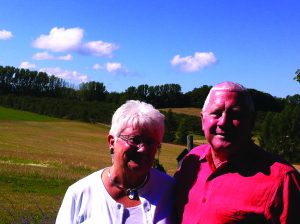 Driving out into the verdant hills of East Leland to the cherry farm owned by the Esch Family has always been a treat. I’ve made this trip maybe a half-dozen times since early 2011, but the trip I made in September felt different. For once, it was not about navigating the agency paperwork necessary to preserve their land; we were done with that. No, I was coming to talk with Larry and Jan Esch about their farm. I wanted to hear about their experiences working the farm and what it has meant to them to preserve it. As important, I was coming to express what is unfailingly hard to put into words: thank you.

Checking the time, I realized I was going to arrive early, so on a whim I turned into the little sugar maple-lined cemetery at the edge of the farm. I remembered that the cemetery’s location had actually helped us when we applied to the federal program for match funding. Farms get a higher score if they’re next to already-preserved land. And, what land could be considered more protected than a cemetery? Thankfully, the government agreed.

As I walked through this quaint old cemetery it dawned on me that I was traveling through a veritable historical register of East Leland farm families. I lost count of all the family names, but what struck me most was how many I had come to know personally and had already worked with to preserve their own farms. There were generations of Bardenhagens, Egelers, Eschs, Spinnikens, and more. I can tell you that there is something deeply moving about working with an old-time Leelanau family who is committed to keeping the farm—well—a farm. I can’t help but come away feeling a bond that stays with me. Standing in that tiny graveyard in the middle of thousands of acres of orchard lands, it felt a little like coming home.

Knowing that I was about to meet with Larry and Jan Esch, I tried to find the oldest family plots in the cemetery. I finally arrived at the stone for Larry’s grandparents, both born little more than decade after the Civil War. I wondered what Theodore & Rose Esch would think of their farm being preserved for all time, and I couldn’t help smiling a little at the thought. But my mood became somber when I observed the grave of Brian Esch. I then recalled hearing about Larry and Jan’s son who tragically passed away in 1994. I wondered whether I should ask the Eschs about Brian’s connection to the farm. It seemed important somehow, but I worried that asking might be insensitive. As it turned out, I needn’t have been concerned.

The moment I arrived at the Eschs’ door, they welcomed me warmly. We could bask in the moment, finally. The farm had recently been preserved, and we shared a feeling of deep satisfaction in the accomplishment. The Eschs had made a commitment to preserve the farm, and the Conservancy and the community helped them carry it through. Larry and Jan knew I was there to hear about their journey and encouraged me to inquire about whatever I wanted to know. I asked them to start by helping me understand their connection to their farm. 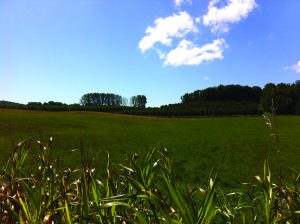 “I wasn’t always this mellow,” said Larry, chuckling. Then, his voice turning more serious, he said “I knew what I had, and I wanted to be in control.” He recalled the early 1990s when the township began thinking about changes in the agricultural districts. The planning commission had been considering allowing fewer land divisions and requiring much larger minimum lot sizes. The aim was to ease the development pressure in farm country by limiting incompatible development. But at the time, the proposed changes were viewed by many farmers as lowering their land values. The county had been witnessing a development boom, and big landowners concluded that if a lot of residential development was inevitable, the resulting conflicts with new homeowners would make it harder to farm. So, conventional wisdom said it would be wise to hedge their bets.

Thus, in 1991 the Eschs split their farm into 19 residential-sized parcels. You’d never know it by driving by the farm, but it would surely stand out if you looked at a parcel map of East Leland. “Were you thinking about getting out of farming?” I asked. “No,” Larry answered quickly. “But we knew our land was valuable, and we just felt that for our family’s sake we needed to keep our options open. We wanted to call the shots.”

Faith      “So, you wanted to keep farming then?” I asked. “We enjoyed farming,” Jan said. “And so did our son, Brian.” I asked them if they wouldn’t mind telling me more about their children. “We have two sons, Brian and Kevin. Kevin is a people-person, and he enjoys the city life.” Larry went on, “Brian loved the farm. He had already begun farming it with us. He had his hands in the dirt and life by the tail.”
Larry paused. “He was 22 when God called Brian home. And that’s when I realized that God calls the shots.”

The Eschs were devastated by Brian’s untimely passing. To make matters worse, if that was possible, it was harvest time—a grueling, all-hands-on-deck slice of the year even in the best of situations. “What did you do?” I said, almost afraid to ask. With a catch in their voices, Larry and Jan related how the farming community instantly rallied. As if by instinct, farm families from all over East Leland began arriving at the Esch Farm. Never mind their own harvest—that’d have to wait. They came to put their backs into the Eschs’ harvest first. “It’s just what people do here,” they told me. Misty-eyed, the Eschs spoke of a kinship and a spirit of generosity among the families in this community. “We are forever grateful to them. Our tears are of love and joy,” Larry said.

Needless to say, a lump had formed in my own throat, “And how do you think Brian would feel if he knew that the family farm will never be sold for development, that it is now preserved forever?” Larry simply replied, with Jan nodding, “Brian would be pleased. Very, very pleased.”

Charity     A stillness saturated the room. I fiddled with my notes, a little lost as to how to begin again. I cleared my throat. “Well,” I said. “You know, I’ve always been curious about how you arrived at the idea of working with the Conservancy.” Jan took the lead. “There was a time years ago when it didn’t seem like the Conservancy’s goals and ours lined up too well. We weren’t sure how much faith we had that the Conservancy was really interested in farmland. But we’ve loved this place as much as anybody.” 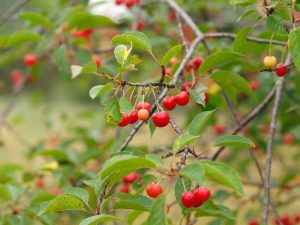 So, what changed their minds? “It wasn’t really one thing,” Larry chimed in. “It took a few years, but we’ve seen how committed the Conservancy has been in working with local farmers. The light just came on for us. We’d always believed in being good stewards of the land. We felt a responsibility to the community take care of this land and pass it on, and we realized that the Conservancy could help us do that.”
Remarkably, the Eschs’ commitment to the community didn’t stop with preserving the farm. They’ve also done something quite unique in the annals of farm preservation—something with an even greater ripple-effect. “One day, I was listening to Lew Gatch on the radio,” said Larry. Gatch has a call-in radio program on WTCM on Saturdays when he talks about estate planning. That particular morning, Gatch was talking about charitable remainder trusts and how both the community and landowners could benefit. “We thought,” Larry recalled, “wouldn’t it be something if we could do even more good beyond preserving the farm?”

That’s when they called Steve Francis, an estate planning lawyer with the Salvation Army. Steve remarked, “It was a rewarding process seeing the Eschs’ vision of caring for the land, their family, their church, and selected charities take shape through a charitable remainder trust. Larry and Jan have given everyone a wonderful gift.”

“God has truly blessed us,” said Larry with Jan nodding solemnly. “We really want to thank all those who contributed, large or small, to saving the farm. Every bit helps to keep these beautiful lands in farming.”

Hope      So, the next time you’re out and about in Leelanau, take a good look around. Permeating those deep green hills of orchards and fields, the impossibly blue hues of lakes and sky, are countless family journeys—the lore of generations—inexorably rooted in this miraculous landscape.

For the Esch Family, during a life of good, hard work, their lands were split into 19 pieces as a hedge against what seemed like the farm’s all-but-inevitable end. Their young son, poised to don the boots as the future patriarch in a long line of Esch farmers, was lost before his time. And yet, the Eschs persevered. Their unshakeable faith and deeply-rooted sense of charity and gratitude has given us another reason for hope. Thanks to them, the ‘inevitable’ has shifted and the farm has been made whole again for good.
How could I say thank you to the Esch Family and have it mean as much as I wanted it to? I honestly didn’t know. I only hope Larry and Jan could tell by the look in my eyes. Like many of you, my gratitude to the Eschs—and all the families who have saved their farms—simply emanates from the heart.

And so, this Leelanau journey, that started with Theodore & Rose Esch and on down through the generations to Larry, Jan, Kevin and Brian, is bound to keep going forever, no matter whose hands will be in that wonderful, lovely East Leland dirt. And when it comes to farming in Leelanau, I can’t imagine a more hopeful sign than that.