Houdek Dunes, with its 100-year old birch trees and beautiful dunes of all types, is one of our most popular natural areas. Thanks to a generous summer family with deep Leland roots, the natural area grew by nearly 30 acres at the end of 2014 when three siblings donated critical wetland adjacent to it.

The donors are William John (Jack) Mead, Frank Mead, III and their sister, Edith (Edie) Mead Holway, who grew up spending summers in Leland. Jack passed away just after the gift was made.  Frank and Edie say the trio donated the land to honor their father, John Mead, and uncle, Frank Mead.

“Dad and his brother were both great fishermen,” says Frank Mead, III. “We would fish wonderful streams all over the area, from the Boardman to the Platte, as well as a terrific pond up in the hills between Provemont and Suttons Bay, which was stocked by the county.”

Edie surmises her father and uncle bought the land because they were enamored with Houdek Creek, which runs through it—and is a spawning area for trout. “I think they had this idealistic notion that they would fish there and come home with a mother lode of trout,” says Edie. The property, then as now, is wild and tangled.

“It was tough fishing, very narrow, with trees everywhere,” adds Frank. “All you could really do was toss a line out. They never cleared it like someone might to make it more accessible.” 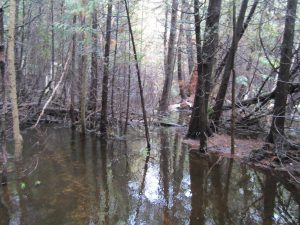 That’s a good thing for the brookies these men loved to catch. The dense shaded thicket provides prime habitat for fish and other wildlife that thrive here. “Houdek Creek is the largest tributary stream flowing into North Lake Leelanau,” says Matt Heiman, Director of Land Protection. “This groundwater fed trout stream is buffered by healthy wetland complexes over much of its course. The dense wetland habitat helps provide critical habitat and maintain very high water quality, which in turn helps maintain the overall health of the lake.” The property contains at least 3,200 feet of stream; however, the vast network of braided stream channels deep in the forest makes it nearly impossible to determine the exact frontage. The property also borders M-22 and therefore protects additional frontage on the designated Scenic Heritage Route. “We’re extremely grateful to the family for making this amazing gift to the Conservancy,” adds Matt.

Houdek Dunes is already one of our largest natural areas at 370 acres, second only to the Cedar River. It is located four miles north of Leland, where the Mead families have vacationed for generations. Both sets of grandparents spent their summers in Leland. John and Sybil (Stafford) Mead—Frank, Jack, and Edie’s parents—met in Leland in 1924 at age 14, and a summer romance ultimately resulted in their marriage in 1935. Frank says his parents travelled north by train to Traverse City, then boarded a steamer ship near Fouch Landing. After a short trip up Lake Leelanau, they docked along the Leland River at what is now the Riverside Inn. 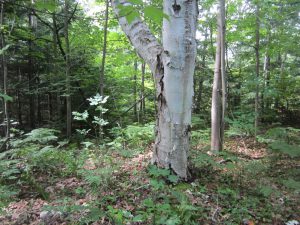 When he was a teenager, Frank says friends would meet at the village lakeside park (now the marina parking lot) and “have our soda pop until the sun went down. I loved Fishtown and would go every morning when the boats returned and watch them unload the daily catch.”

“I adore Leland,” adds Edie, who like Frank, lives in Boston. “It’s a place where our family, which is scattered all across the country, gathers every summer.”

This past July, Frank and his daughter, Kristina Mead Vetter, visited Houdek Dunes for the first time. She is a marine biologist from California, with two young daughters “who love to hike,’ says Frank. “We had heard about the wonderful old birch trees there, and loved the little overlook of the stream. We had a great time and it made Kristina and me feel very pleased about what my siblings and I were doing.”