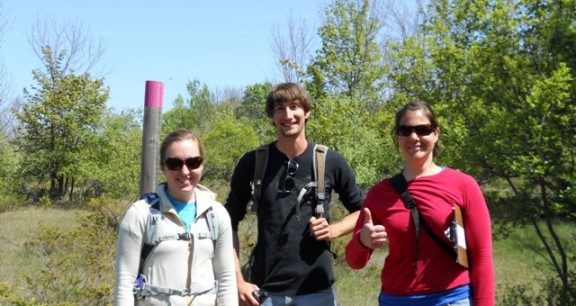 May 17, 2012–I have to admit that I wasn’t paying too much attention to the street names as I drove up through Northport towardsCatheadBay. It was finally sunny and pleasantly warm—a combination that had been oh so elusive here inNorthern Michiganthis spring. I was on my way to Lighthouse West Natural Area in the tip of thePeninsula, and I’m proud to say that I only got lost once on my way to the 45-acre expanse of woods, old farmland, bluffs, and shoreline. The day was just too nice to look at directions. Thankfully, the members of the Early Detection, Rapid Response crew that I met up with were armed with GPSs and an extensive knowledge of the landscape. 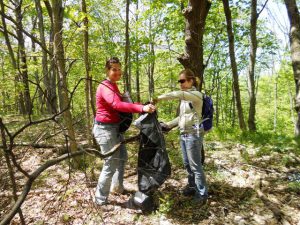 The EDRR crew, made up of three specialized land surveyors, was off to inspect the high fields of the natural area for early-stage invasive species. Their job, as suggested by their crew name, is to sweep loose transects of Conservancy natural areas and easements for early signs of non-native, rapidly spreading plant species—responding by either enacting immediate removal/treatment, or recording coordinates of the affected area for later treatment if the species permeates a larger area.  The crew is funded by a 2012-2013 Grant entitled SOGL—Sustain Our Great Lakes. The grant itself is through the National Fish and Wildlife Foundation, a non-profit that seeks to preserve and restore our nation’s native wildlife species and habitats. This is not just an individual mission; the Nature Conservancy, Grand Traverse Regional Conservancy, Southwest Michigan Land Conservancy, Land Conservancy of Western Michigan, and the Leelanau Conservancy are all partnered under the SOGL grant, working together to improve the resilience of Eastern Lake Michigan shoreline and prevent further degradation of said habitat from invasive plants.

Sarah, Kendra, and Ryan planned to work with the higher lands of the area that day. They had already surveyed the higher quality environment of the lowlands the day or so before, commenting that some areas take priority in ecosystems. In the case of Lighthouse West, some of the higher grounds were once farm fields, which allowed for unnatural manipulation of the native plant species. Old farm fields are usually amok with already known invasives, requiring intensive treatment. The EDRR’s focuses more on early detection—identifying new species that threaten to overtake natives. Their reasoning for surveying the lower quality ecosystem of the fields that day was to make sure invasives couldn’t spread to high quality areas—a preventive measure. This early detection method serves to combat future spread—stopping things before they get too out of control. Sarah explained that invasive species crowd out native ones because they bloom earlier or leaf out sooner, creating advantages over their local counterparts. 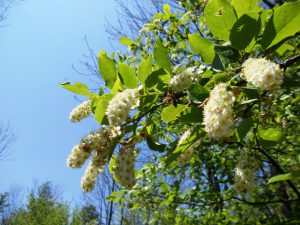 But what’s the harm with a few pretty, exotic plants being introduced? Some non-natives don’t spread rapidly enough to be considered a threat (like the beautiful lilac bush, for example.) Others like the prickly barberries, the herb garlic mustard, aromatic sweet woodruff, and the sprawling honeysuckle grow quickly and don’t interact with the insects and animals of the ecosystem like natives do, failing to return the same nutrients to the soil as well. A lot of stores in the area even sell these invasives, oblivious to the fact that they can wreak havoc on the local ecosystem if left uncontained.

I followed the team around for about 2 hours, distracted more than once by trying to write, take pictures, and wrestle with thick bushes and unruly thickets that were almost impossible at points for my awkward limbs to navigate. The crew was at home in the natural area though; they spaced themselves out in a line and went forth into the woods, fields, and brush without fear. Many Conservancy ecological communities were previously mapped out, allowing the EDRR to prioritize in terms of narrowing down possible species and figuring out what should and shouldn’t be there. They would stop to debate about a weird vine or point out invasive species—a honeysuckle here, an autumn olive there—noting the spread and density for future references and data compilation. 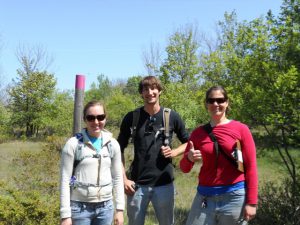 Every so often the three would realign and sweep out a different area, eventually looping back on their original path, making sure to keep in line with their GPSs. I shadowed behind, enjoying the fields of oak saplings, young strawberry plants, and even enjoying the white-flowering trees which hummed with bees. I started getting slightly sunburned and decided it was time to hop back in my car and find my way back to Leland anyway. The crew would continue after I left; more daylight to work with. I waved goodbye to their parting words: “Just don’t make us seem too weird in your story.”